An epic struggle over land, water, and power is erupting in the American West and the halls of Washington, DC. The story begins when a 4,000-square-mile area of Arizona desert called Black Mesa was divided between the Hopi and Navajo tribes. To the outside world, it was a land struggle between two fractious Indian tribes; to political insiders and energy corporations, it was a divide-and-conquer play for the 21 billion tons of coal beneath Black Mesa. Today, that coal powers cheap electricity for Los Angeles, a new water aqueduct into Phoenix, and the glitz of Las Vegas.

Tourists to Las Vegas are mesmerized by the water fountains at the Bellagio, but they don’t ask where the water comes from. They don’t see a city with the nation’s highest rates of foreclosure, unemployment, and suicide. They don’t see the astonishing drop in the water level of Lake Mead —where Sin City gets 90 percent of its water supply— or the multi-billion-dollar water pipeline planned to tap a mountain aquifer 250 miles away.

Nies shows how the struggle over Black Mesa lands is really a global phenomenon in which giant corporations separate indigenous people from their energy-rich lands with the help of host governments. Unreal City explores how and why resources have been taken from America’s native peoples, what it means in an era of climate change, and why, in this city divorced from nature, the only thing more powerful than money is water. 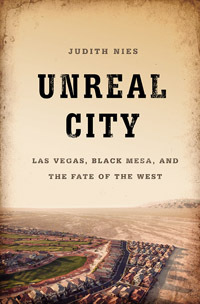 “A tough-minded account of Las Vegas . . . shocking yet artful, Nies owns this story as if it were autobiography…”
--Megan Marshall, Radcliffe Magazine