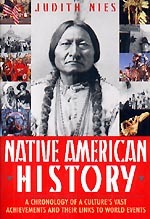 NEW PERSPECTIVE ON NATIVE AMERICAN HISTORY:
A CHRONOLOGICAL ACCOUNT OF ITS PLACE ON THE WORLD STAGE.

Native American History is a breakthrough reference guide, the first book of its kind to recognize and explore the rich, unfolding experiences of the indigenous American peoples as they evolved against a global backdrop. This fascinating historical narrative, presented in an illuminating and thought-provoking time-line format, sheds light on such events as:

This invaluable history takes an important first step toward a true understanding of the depth, breadth, and scope of a long-neglected aspect of our heritage.

"Here from the earliest times to 1997, are the most important events in world history juxtaposed with crucial events in the history of American native peoples...highly recommended..."
-- Katherine Powers, The Boston Globe

"A superb book, well-researched, vividly written...It should be in every library."
-- Harvard Review

"Of indespensable help to all history instructors is Judith Nies' Native American History ..."
-- National Endowment for the Humanities/ Saddleback Seminar