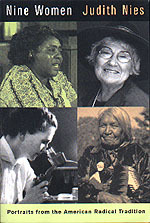 “Buy Nies’s book and read it aloud faithfully, until all of you, young and old, have shared and incorporated into your vision of America the heroic, unique and visionary contribution women have made to the history of these United States.”
-- Cynthia Warrick Kemper, Los Angeles Times Book Review

“Nies begins here to restore the great women radicals to the tradition, knowing that to think of these heroic women simply as fighters for women’s suffrage…is to impoverish …the larger political tradition of which it is a part.”
--Frances Putnam Fritchman, In These Times